Dan Tenorio: A Most Remarkable Farmer 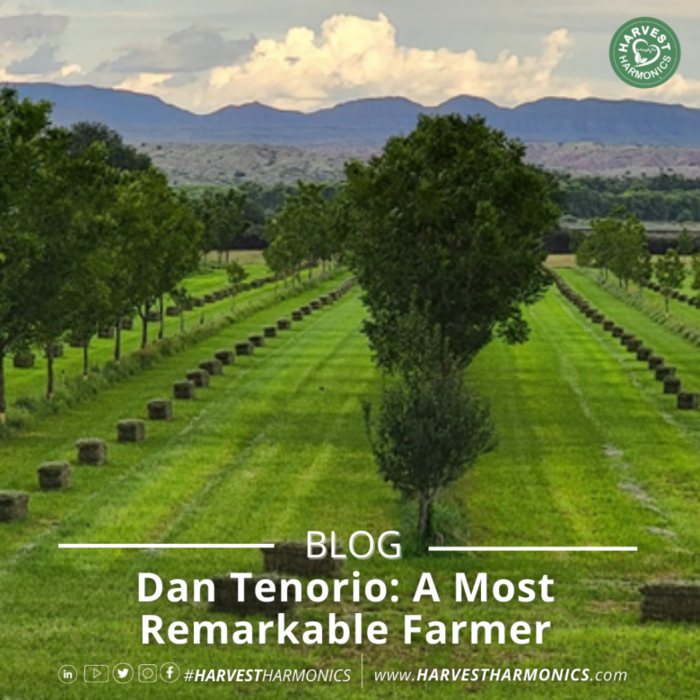 It has been my delight and treat to get to know Daniel Torino, Veteran, Family Man; Man of the Earth.

When I began writing for Harvest Harmonics, I knew that I would best serve the function of writer for Harvest Harmonics and the planet to get to know men and women who have used the Kyminasi Plant Booster and tell their stories. The only way to do it right would be by personal contact, to take the time needed to truly know them and write about them.

Dan was my first, and I could not believe my good fortune in getting to know a man of such character, intelligence and strength in my first interview.

Because of his intellect and scientific ability in research and creativity, Dan was assigned to weapons Research and Development in the U.S. Army, creating highly efficient weapons to be used

in case of war. He was assigned super-secret projects which even today are protected. After years of top-secret discoveries, upon discharge he had difficulty readjusting to civilian life. He had to discover his own therapy to move on in life and livingness. That was 25 years ago.

Dan was a man searching for a cause and at the same time a way to make a living that would challenge and satisfy his creative needs. He felt his life would be wasted if he jumped into the usual rat’s race for money, office walls and timetables and politics.

He was an artist without an art until he found one that he could love and duplicate, and he found it in the very soil beneath his feet. He innately knew there could be magic in the earth if it was given the right treatment, nutrients, and care, and could be made to grow anything. He jumped right in.

He bought 17 acres in Sorocco, New Mexico, and started farming hay as forage for cattle. Like most land that was used for farming, his beloved soil had

been poisoned through fertilizers, insecticides, pesticides, and whatever previous farmers had used to force crops from it.

He knew that water could retain memory

After all, Dan was a brilliant scientist who read and studied widely across any area that interested him. He knew that a happy marriage of water and earth was a vital one to the farmer, and most farmers just didn’t get it. Water has a frequency, the earth has a frequency and everything, living and not living, has a definite designated and duplicatable frequency. He said that there was no data about how to optimize the soil in the arid climate of his region, and he stumbled onto the Kyminasi Plant Booster marketed by Harvest Harmonics.

He read all the promotion on the unbelievable harvest yields..

He had his doubts, but the soil he had been farming was rapidly depleting. He had been planting 15 acres of hay and had been yielding 700 bales and had dropped down to 250 bales each planting, and

was getting worse. He had refused to fertilize and use insecticides and his land had pretty much purified itself of those toxic agents and was clean for the past 4 or 5 years, but he knew the degradation of the soil was the problem, not lack of fertilization.

Give it a shot

Dan had a decent monthly income from the military but may have difficulty in surviving with such diminishing yields, so he decided that he would roll the dice an see if the claims of Harvest Harmonics were anywhere near true. He irrigated the field and within 10 days noticed the grass had grown 8”, which was phenomenal! But not only that, the blades were thicker and deeper green.

Throughout our interview he used the word “phenomenal” several times.

1436 2 strand bails of much higher quality in resident nutrition and tops in every respect.

Dan had 15 acres in pecans, which he watered with the KPB water after the trees bloomed. Here are the stats he provided regarding the yield:

Impressive? Anyone can see the difference

Pecans:
A 30% difference in pecans in just one growing season alone. The visual of the plump, fat pecans make a clear difference between 2021 and 2022.

Just think, Dan is just getting started. He is more than a farmer. He is a true visionary, as reflected by what he wrote in the quote below. Look at the beautiful family and the hayfield. To the eyes of a man of the soil it is like a painting he painted himself in love with his subject. Dan’s viewpoint of life and his optimism is reflected in the smiles on the faces of his family. I feel like I can warm my hands on this picture.

The future of the planet

The future of planet earth and its peoples depends upon the farmer, his pushing ahead technologically with the goal of a society of humans

that are healthy and happy. Dan is truly one of the men of vision who are leading the way.

“This to me is evolution of the human species, we have sat idle in a way of growing that is currently failing humanity and has not moved forward in many years. I witnessed this new product changing something within the plant that is healthier stronger and is using less water. We must change as growers and understand we are a part of a living organism and have to work with it and stop the need for focus on the bottom line and start focusing on sustainability of our soil and in turn the longevity of the environment that is currently sustaining all humans. Currently humanity in large is on a failing path with the focus being on money and not the health of our children, would you give your child a spoon full of chemically enhanced fertilizer or a spoon full of water that has all the vitamins to sustain them? I choose water for my child and so would you because you care about your

children and us as a human species are smart enough to recognize we are currently giving our children by choice spoons full of chemicals, we are what we eat, and us as humans have to evolve and move forward with new ways that work with this world and us.. I believe Harvest Harmonics is taking a step in the direction of moving forward for us as a species with a new healthy way.”