How to Face the Challenges in Sweet Pepper Production

Despite the turbulent economic issues agriculture has gone through these past years, the cultivation of bell peppers remain strengthened in the regions with the highest production such as Mexico and the United States; however, as a collateral effect of the pandemic, market quotas face drastic changes since a decrease in production are expected within the United States and a greater supply will be coming from Mexico and Canada.

The sweet pepper market in 2020 was supplied by crops in different regions of the world including the United States and Latin America, where peppers grow under different climatic and agronomic conditions from traditional crops to complex greenhouses with the latest technology using irrigation and lighting control. Many of these regions seek a space in this market that is dominated mainly by Mexico, the United States (California and Florida), and Canada, which provide at least 80% of total demand and worldwide production volume (http://producebluebook.com.2020).

Data for 2020 have already shown a strong trend of production growth in Mexico, which increased by 62 million kilograms compared to 2019 and a significant decrease of 11 and 16 million kilograms in California and Florida, which are the main producing states. 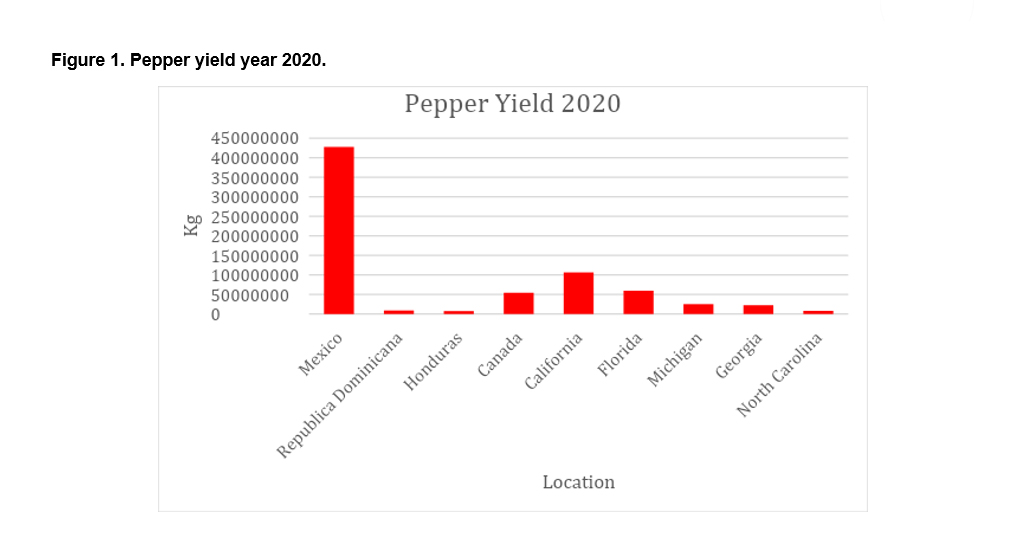 Pepper varieties differ in characteristics such as fruit size, shape, number of lobes, flavor, and disease resistance. Bell peppers are widely grown all over the United States. Main pepper crops are found in the open field and some are raised in bed and with drip irrigation systems.

Sweet peppers are one of the most popular vegetables consumed and are widely cultivated in some regions of the world. Additionally, it is known that their fruit contains high levels of vitamins A and C (Elwan and El-Hamahmy, 2009; Rajput and Poruleker, 1998). Its cultivation, however, is subject to different environmental factors that affect their growth and productivity. A rigorous study of the productivity of sweet peppers (cv. California Wonder) was carried out in the Department of Horticulture and the Department of Agricultural Botany at the University of Tanta in Egypt in which the seeds of the chosen variety of sweet peppers were subjected to different processes with and without magnetic field influence from germination to its production phase determining the positive influence that electromagnetic fields have on the development, growth, and productivity of this plant species. The results obtained show that exposure to controlled electromagnetic fields is an effective method for the treatment of seeds that enhances their germination rate and the productive capacity of the plant, increasing the quality of the fruit.

This investigation showed that the germination of the seeds subjected to the electromagnetic field occurred one day before the seeds were not exposed. After 14 days a germination percentage of 90.3% was reached in the treatment compared to 83.3% in the control group. Likewise, the growth of the plant was increased by 23.5% related to an increase in the size of the plant, fresh weight and dry weight of the plant, and the number of branches and leaves per plant (Ahamed et al., 2013).

Regarding production results, it was observed that the fresh and dry weight of the fruit, the number of fruits per plant, and the total marketable production presented a significant increase in those plants subjected to the influence of the electromagnetic field, as well as the differences between the size and diameter of the fruit (Table 1). The total marketable production in each of the studied sessions (2011 – 2012) presented a significant variation compared to the control treatments not subjected to an electromagnetic field. This increase is directly related to the increase in the fresh weight of the fruit and the number of fruit for each plant showing a difference of 12.95 tons in session 1 compared to 14.52 in the production of plants subjected to the electromagnetic field and 14.69 tons in session 2 (Fig. 2). The other effects found are related to a higher content in the leaves of chlorophyll a and b, and carotenoids of plants that grew under the effects of the electromagnetic field, as well as higher concentrations of total solids and vitamin C. 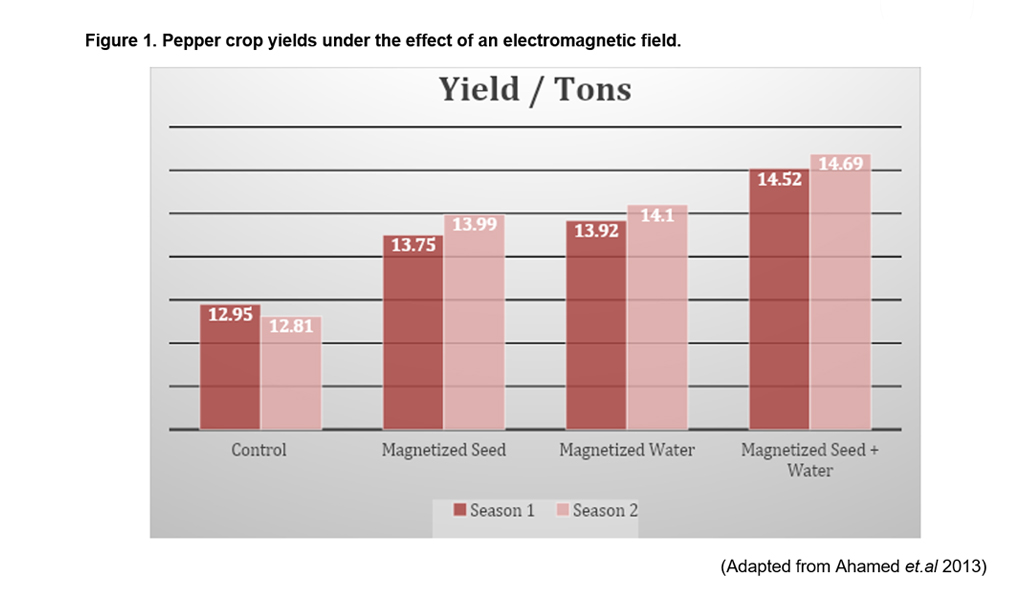 Subjecting seeds or plants to electromagnetic fields or irrigation water under these conditions is shown to have a positive effect on seed germination, growth, and production in pepper plants. This correlates with the previous documentation from 2002 by Aladjadjiyan and in 2003 by Atak et al., who postulated that these effects are probably related to ionic currents within the embryo’s cell membrane inducing changes in osmotic pressure on both sides of the membrane causing alterations in the water conduction mechanism. These electromagnetic fields were also shown to have a positive effect on growth and production related to an increase in the vegetative structures of the plant and its flowering also related to changes at the level of the plasma membranes which play a determining role in the assimilation of nutrient necessary for development (Ahamed et al., 2013).