Most Profitable Crops in The Short Term in 2022 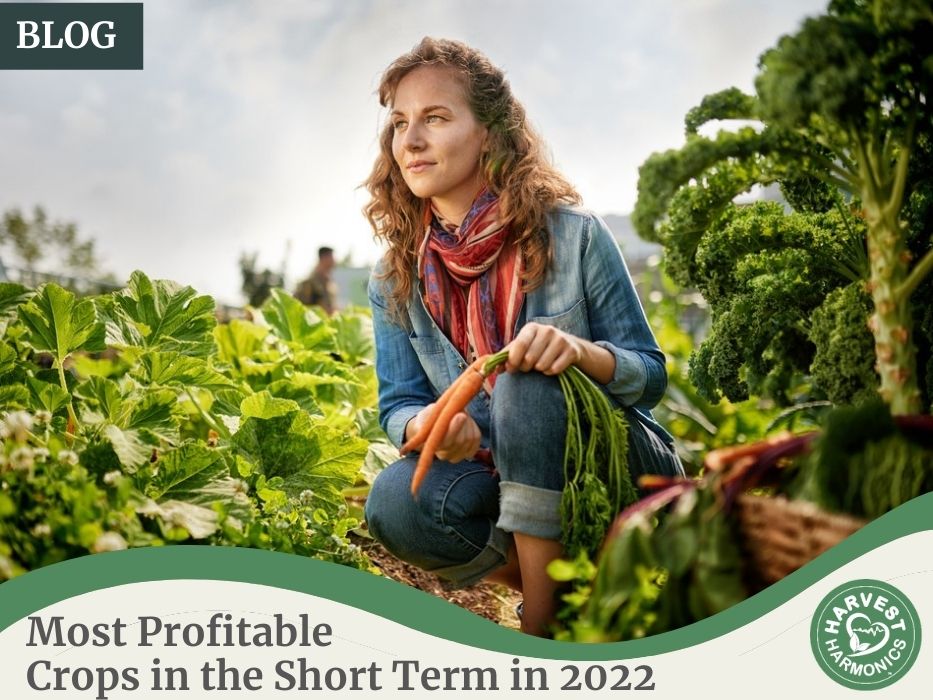 Surely you have heard of profitable crops that are in fashion: pistachio, almond, olive groves in hedges, and more.. However , crops which ones allow you to recover the investment as quickly as possible? In this article, we analyze the most profitable crops in the short term in 2022!

Choosing profitable crops in the short term is not easy. This is because agriculture is not always an exact science and the forecasts of production and prices can be discupted at any time. Even so, when proposing a new agricultural investment, it is essential to be clear about how long it will take to amortize the famr expenses. Thus, we will provide some general points that you can consider when choosing which crop is going to make your land more profitable in the short term.

Almond cultivation: productivity and profitability in the short term

In recent years, much has been said about almond cultivation and new agricultural plantations of this type have proliferated in many regions. There has even been talk of the risk of a speculative bubble in almond cultivation. The truth is that there are different almond plantation systems, and each one has its advantages and disadvantages.

As an investment, it is clear that in order to obtain good short-term profitability results, it is necessary to opt for semi-intensive or super-intensive almond plantations. Entry into super-intensive production is achieved before semi-intensive. This is also noticeable in the period of recovery of the investment, although the initial investment is almost double in superintensive compared to the other system.

It is clear that the short-term profitability of almond cultivation has greatly improved, with all the technological advances and knowledge that are being carried out in this crop. This, apart from the attractive prices, makes it a profitable crop in a very interesting short term.

As we have seen in the almond tree, super-intensive systems shorten the entry into production of crops, in addition to making them more productive. This allows them to be profitable crops in the short term.

Olive cultivation is another typically traditional crop that has been intensified to make it more profitable. When we talk about hedgerow olive groves, there are two key aspects that make it profitable:

Mechanization of tasks and reduction of production costs

To get to this second point, we all think that it is essential to have irrigation for the hedge system to be successful.

Is it possible to have olive groves in dry land?

Making a good management of the plantation design, the choice of the variety and the pruning, yes. There are numerous examples in the northwest of Spain and also in the south, which for a couple of decades have been shortening the olive grove plantation frameworks. It is even possible to successfully grow dryland olive groves with 500 mm annual rainfall.

The entry into production is done in a short time. After 3 years of planting we can have the first harvest, and in the fourth year we are already at the neutral point with the plantation amortized.

Obviously the long-term return is not going to be as great as an irrigated plantation. But we are talking about an acceptable return: without a lot of investment (cost of the 1st year around US$1,000/ha), and in relatively short terms (4-5 years) that cannot be achieved with other permanent crops.

Pistachio cultivation: profitable yes, but in the short term?

Another profitable crop in the short term is the pistachio, which can be very well adapted to our climates and for which high prices are also predicted for the coming years.

Its entry into production will depend on whether grafted or grafted feet are planted. In the first case, after 3 years the plants begin to produce, while in the second, it can take up to 7 years.

The return on investment in pistachio cultivation is a little longer (7-8 years). In this way, although it is a profitable crop, it is not in such a short period of time as we have seen in previous crops.

Good profitability in the short term with extensive crops

It is clear that the short-term profitable crops par excellence are annual or extensive crops, since each year one or two harvests can be made. However, in the long term, they will not bring us as much income as a plantation. But in some areas there is no other option than to choose annual crops to keep the farms going. What crops are more profitable in this situation?

There are typical cereal-growing areas where oilseed crops, which are generally destined for the production of bio-diesel, are very interesting options due to the high prices at which they are quoted: camelina and rapeseed can leave gross margins between 300 and 500 US$/ha.

In irrigated fields, the typical crops of cereal, forage or corn, the margins are increasingly tight and it is more difficult to convert them into profitable crops in a short time, due to the high prices of inputs (diesel, fertilizers, phytosanitary products) and low prices of the productions. For this reason, in this sector you can choose between two alternatives:

Continue with the same crops giving them additional value

Corn for human consumption instead of feed, quality wheat for bakeries, barley for malt. Normally, these alternatives involve making contracts with the company that buys the harvest, which guarantee a minimum price and advice during the crop cycle. Or even double crop corn and winter grain.

Look for profitable alternatives to corn and change this crop for soybeans, replace cereals to grow horticultural products for canning industries (peas, tomatoes, beans, broccoli, etc.) or change typical forages for more productive ones such as siambasa grass.

Control your costs to know the profitability of your crops

Finally, whatever investment you are considering, it is essential to monitor it, but it is not enough to collect invoices and bank receipts.

To evaluate which crops are profitable in the short term, you have to know which plots and varieties are giving the best results, which tasks involve the most expense, such as the Return on Investment, and a long list of economic parameters to ensure success.