The Science of Harvest Harmonics

The technology described here was developed over many years using the “Edisonian” approach. The objective has always been to find a safe, reliable, and inexpensive way of enhancing agricultural production naturally and without chemicals. Because it is a new technology, the precise mechanisms of action on plant chemistry are still being studied in order to form a more complete understanding of the processes at work.

The inventor is a Swiss-born researcher living in Como, Italy, named Fulvio Balmelli. He coined a new word to describe the results of his work: Kyminasi. The agricultural products are known as Kyminasi Plant Booster.

The electrons that hold all matter together move, and these motions create vibrations. For any structure, these vibrations combine to form a composite frequency which is known as its natural frequency. We can identify such frequencies between atoms using technology such as infrared spectroscopy.

Kyminasi Plant Booster (KPB) technology is based on the theory that the natural frequencies of the vibrational bonds between atoms in a plant can affect the chemistry and health of that plant. It is further theorized that adverse environmental conditions can alter a plant’s normal frequencies in a way that negatively affect plant health. And finally, it is theorized that by exposing plants to their ideal natural frequencies for various functions, the molecules in the plants will harmonize to their normal and ideal vibratory frequencies, thereby improving plant health. KPB technology acts on plants the same way a tuning fork is used to tune a musical instrument. 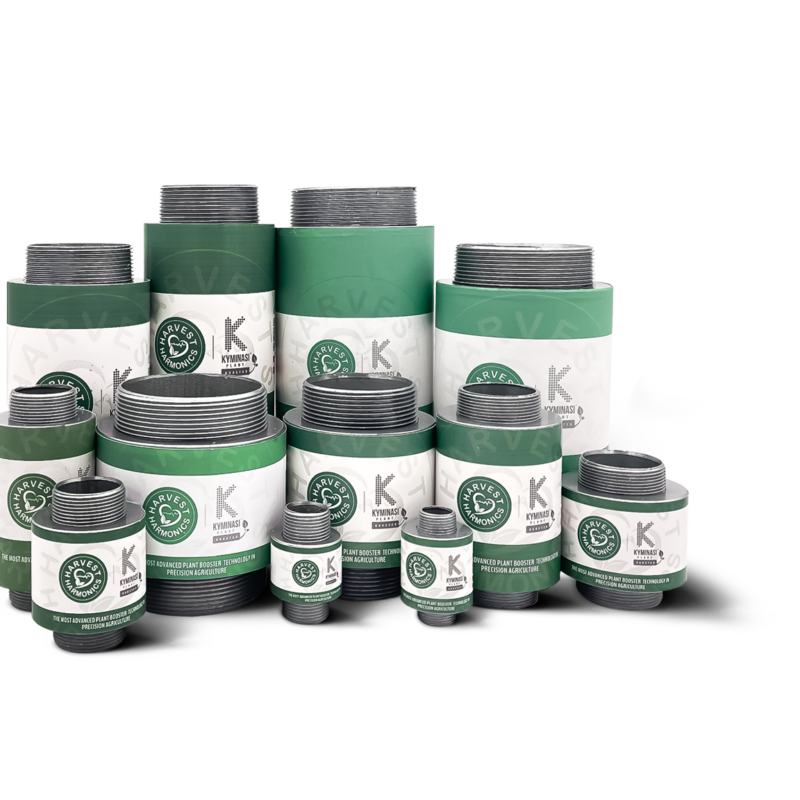 A key step in developing the KPB technology was finding a way to identify natural frequencies associated with ideal plant function. To do this, Balmelli adapted a device developed by a German researcher that recorded vibrational frequencies of various organs in the human body [Brugemann, 1987]. The device operates on different principles than an IR spectrometer, but also measures frequencies emitted by the vibrational bonds between atoms.

Once the vibrational frequencies associated with specific plant functions could be mapped, the next step was finding a way to store them on a transmitter device. Various materials were tested and custom software programming was written. Ultimately a silicon-and-metal-based microtransmitter was developed that could store and transmit the necessary signals.

In much the same way as a stereo uses a small electrical current to carry specific frequencies to speakers, water acts as a carrier wave for transmitting the information stored in the microtransmitters to plants.

The frequencies selected for the microtransmitters optimize vibrations associated with the following functions common to all plants: 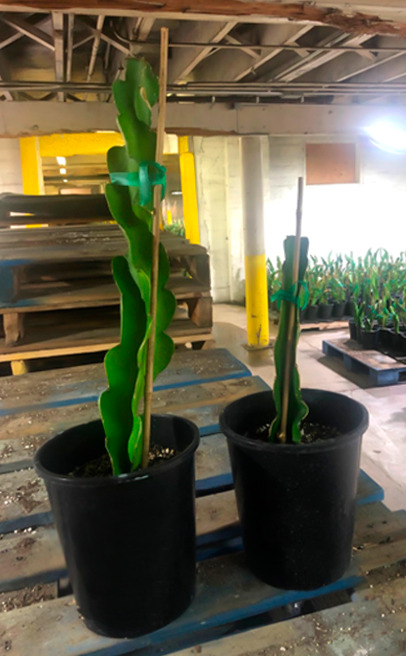 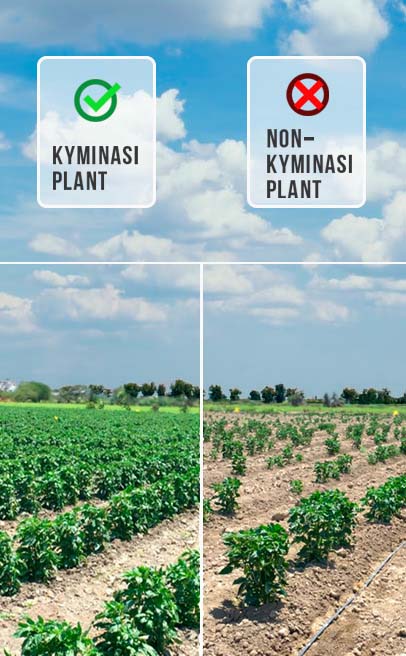 Balmelli found that each of the above functions was associated with specific combinations of low to extremely low radio frequencies ranging from 150 kilohertz down to 10 hertz. In all, more than 3,000 separate frequencies are programmed onto the microtransmitters. The signals are emitted in pulses, which sequentially act on the plants to provide the desired “tuning” effect. In other words, it appears that certain frequencies will produce a change in a plant that allows it to then absorb a different set of frequencies and so on until normal vibratory frequencies are achieved. This interaction can more simply be defined as “a combination of frequencies traveling together in pulses that provide sequenced instructions for ideal plant functioning at the molecular level.” Balmelli describes this process as “algorithmic wave packets.”

Showing that signals are being transferred to the water can be demonstrated with fast freeze tests, which highlight a change in the crystalline arrangement of the water. Other water characteristics such as pH, electrical conductivity, carbonates and bicarbonates, calcium, magnesium, sodium, and sodium absorption rate do not appear to be affected.

Proof-of-concept field trials started in 2015 on a variety of crops at multiple sites located in Hawaii, Australia, Panama, and Washington State. The results validated expectations but also highlighted a limiting factor. The KPB technology would only work with water moving at relatively low flow rates (approximately 20 gpm). In December 2018, however, Balmelli made a breakthrough which increased the maximum permissible flow rate to 2,600 gallons per minute (164 liters per second). The minimum flow rate necessary to activate the technology is a very low 0.26 gpm (.017 lps).

Subsequent to this advancement, an agricultural lab in Italy (Minoprio Analisi e Certifications) was commissioned to do two studies: one to demonstrate safety and the other to demonstrate that KPB technology could affect nutritional uptake in plants.

The safety study used spring barley to test for phytotoxicity. The lab concluded:

“The results of the growth test with spring barley showed no phytotoxicity of the water treatment system.”

This is what the researchers found:

“Positive effects (increased absorption of plants irrigated with treated water) were found for nitrogen, calcium, magnesium, manganese, and zinc; on the contrary, for the elements potassium, iron, and for phosphorus, copper, and sodium, the absorption was superior in the control plants (untreated water).”

While this mixed nutritional uptake result was unusual, in Edisonion fashion Balmelli used these studies to further refine the frequencies programmed into the microtransmitters. Subsequent tests demonstrated approximately 4% increases in nitrogen and phosphorus and 6.5% in potassium (NPK), with no reduction in magnesium. Iron, manganese, and sulfur were higher in the control crops.

It is important to keep in mind, however, that increased mineral uptake is only one component of the overall effect of KPB treated water. Field observations of plants grown using Kyminasi Plant Booster have shown the following characteristics:

Plants that are healthier, stronger, and more resistant to disease and insects. Larger, more appealing and plentiful fruit and vegetables.
Produce which stays fresher, longer, after harvest (extended shelf life).

Produce with enhanced flavor and quality as measured by higher degrees Brix* and other similar ratings. 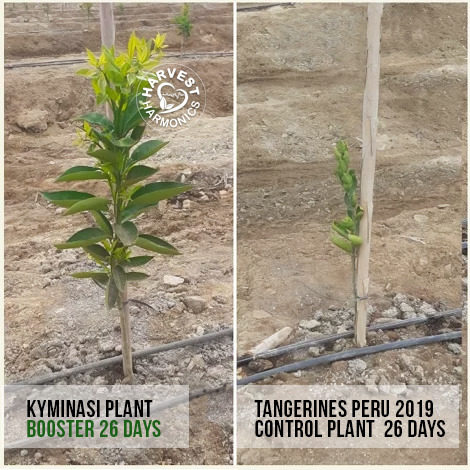 * The Brix rating is named after German engineer Adolf Brix and is used in the food industry for measuring the approximate amount of sugars in fruits, vegetables, juices, wine, soft drinks, and in the starch and sugar manufacturing industry. For fruit juices, 1.0 degree Brix is denoted as 1.0% sugar by mass. This usually correlates well with perceived sweetness.

After three years of use, soil tests at one of the early test sites in Washington State show a dramatic 47% increase in the Cation-Exchange Capacity (CEC). Cations are positively charged atoms or molecules, such as those from potassium or calcium, in a form that can be absorbed. CEC is a measure of soil fertility, as it measures the capacity of the soil to retain nutrients.

And finally, the potential to increase water absorption in plants holds immense promise for drought-prone areas and represents another important line of investigation.

The use of Kyminasi Plant Booster Technology appears to be a safe and effective means of improving plant health and yields for irrigated crops. Limited data also indicate KPB technology may be an effective means of reducing the amount of input chemicals needed to ensure a successful harvest. Given an available market to sell the crops, lower costs and higher yields will result in increased profits for farmers using Kyminasi Plant Booster technology.