The water problem is solved 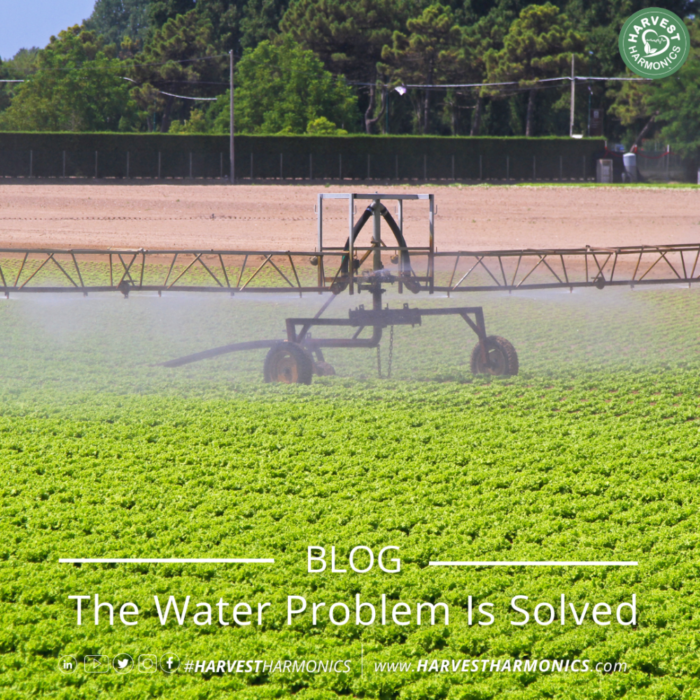 “All day I face the barren waste, without the taste of water… Cool, clear water.”

I can’t help but smile thinking of that great song by the Sons of the Pioneers that was so popular back in the day. I know every word of the lyrics and hear the melody many years later. I went to their concert, wearing my boots, jeans and cowboy hat and had my picture made with them on stage. One of those great times that made memories. I never dreamed our world would be in need of water. Parts of the United States are suffering from a megadrought that is harming our farmers.

Water is Boss on Planet Earth

This article is about water, its importance to man, his food source, the current and future problems of water availability and an amazing discovery that will help us get through this coming crisis.

This is a short summary of the facts of water on our earth. I know I am probably preaching to the choir, because you probably know these facts already But just in case you don’t, I am laying out some relevant data about water. Anything that we rely on so much for our survival is boss in many ways.

Man evolved on planet earth, which is known as the Water Planet. About 71 percent of the Earth’s surface is water-covered, and the oceans hold about 96.5 percent of all Earth’s water. Views from space leave little doubt. From some angles it appears that the earth is nothing but sea. It is little wonder that 60% of the human body is made of water, as it is a part of the earth from which it came. Not only does water occupy the vast majority of the earth’s surface and the fluids of all known living organisms. It is vital for all known forms of life.

World Economy Water plays an important role in the world economy. Approximately 70% of the freshwater used by humans goes to agriculture. Fishing in salt and freshwater bodies is a major source of food for many parts of the world, providing 6.5% of global protein. Much of the long-distance trade of commodities (such as oil, natural gas, and manufactured products) is transported by boats through seas, rivers, lakes, and canals. Large quantities of water, ice, and steam are used for cooling and heating, in industry and homes. (Wikipedia)

There Is Lots of Water, So What Is The Problem?

The problem is that global warming has altered the earth’s precipitation pattern, and the present megadrought conditions on a global scale, and in our country, has created crisis among farmers ability to supply enough water for their crops. Many must reduce the size of their fields and thus production and income.

Water is essential for agricultural production and security of our food supply. It is the lifeblood of ecosystems, including forests, lakes and wetlands, upon which our present and future food and nutritional security depends. And our freshwater resources are dwindling at an alarming rate. Depending on our diet, we use 2000 to 5000 litres of water to produce food consumed daily by just one person? And another interesting fact is that farming accounts for around 70% of all water withdrawals in the U.S., and even more in developing countries.

Global warming is creating areas that were marginally farmable as no longer arable, capable of producing crops. And now some lands that were rich farmland has less “green water” (water in the earth feeding the roots usually supplied by rainfall) or “blue water”, water from irrigation, rivers, etc., brought from exterior sources because of dwindling sources.

Where does this take us?

It is a situation… For example, in an article by Amy Danise, she said, “American farmers account for

using 40% of the state’s available water – -much of which comes from gradual melting from the Sierra Nevada snowpack, which is now at a fraction of its normal level. These state farms are vital for many food commodities, accounting for 46% of U.S. fruit and nut production. Because of water restrictions, some farmers who are limiting their crops are continuing to tap out wells, which can cause the ground level to drop.”

It is a serious situation and farmers must now find a solution, as we who consume what they produce may be facing food shortages as a result of these changing conditions, and this means that food production is going to become more expensive, farmers are being impoverished by lack of water and are now having to reduce acreage to have adequate water.

If that isn’t trouble enough, government restrictions and suppressive rules, as you will find in abundance in California, are pushing farmers out.

What is the solution?

Find more sources of water? There are none we know of other than the old sources. However, there is a huge ocean of water below earth’s mantle. It is enough to supply the earth with all the water that will be ever needed. But it is available but only after impossibly expensive drilling, which is being developed now. So we must find a way to continue producing our food supply with less water now.

Lo and Behold an Answer Appears

Suppose you had a magic wand and you could touch it to your irrigation pipe and the water would cause your crops to double with half the use of water that was usually needed? What if it also made the plants healthier, larger, roots stronger, and leaves brighter as well as being loaded with your fabulous products? There is no supposing to it. It is real!

The magic wand is the Kyminasi Plant Booster

How does it work? The Kyminasi Plant Booster consists of easy-to-install, ready-to-go, advanced custom microtransmitters utilizing 3000+low-frequency radio waves attached to an irrigation system. The Kyminai Plant Booster is activated

when water firsts flows past it. KBP is custom-sized for each farm and designed to work with all crops planted on soil. No power system or maintenance is required. Irrigation devices use an advanced signaling system to boost photosynthesis and crop yields in plants.

It changes the frequency of the water that invigorates the plants and the crops require half the usual amount of water. This innovative device is the result of years of research and testing. Go to www.Harvestharmonics.com, and read about the science behind the KPB and the astonishing success farmers are experiencing in 31 countries across the globe. Farmers worldwide are calling in to learn more about the Plant Booster.

Remember every day in producing less or having to used more of this precious water is money lost to you and your family. Call Harvest Harmonics now and learn more about how you can assure your farm will prosper.